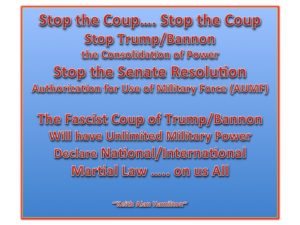 Your acts to consolidate power to progress the Extremist agenda of Corporatism, Fascism and Supremacy, as well as the Senate resolution pushed by your GOP sympathizers, to give you unlimited military power (AUMF) to declare national/international Martial Law are un-American acts of treason against the American people.

We the people….. please read and share the articles below….. inform, educate and let’s have a nationwide strike against Trump?

General Strike Feb. 17: What will happen if activists stage a nationwide strike against Trump?
https://mic.com/articles/167192/general-strike-feb-17-what-will-happen-if-activists-stage-a-nationwide-strike-against-trump#.jdSslHhS8